The wonderful escape from death of a lady who was saved by her brave and faithful dogs is another proof of the devotion and keen instincts even of Irish wolfhounds, not generally looked upon as ladies' pets. Mrs. Gerrard, the lady in question, was out walking in Cheshire one day when a savage pig attacked her and threw her down. Her cries for help were fortunately heard by her wolfhounds in the adjoining field, who at once responded to her voice, and, leaping over hedges and ditches, flew to her rescue, dragging the pig away and pinning him down. On country walks a large dog is indeed a valuable protection, for he is as a rule as quiet as he is strong and as brave as he is affectionate. No tramps would dare molest a lady walking with such a protector and, indeed, a large dog is a far preferable companion to the little, snapping, snarling terriers which usually usurp the best places in the drawing-room under the guise of spoiled favourites.
Note: Mrs. Gerrard (which should have been spelt 'Gerard' ) had the kennel name of "Kidnal" and was the owner of Cheevra, a very daney bitch who still had a marked effect on the breed. Mrs. Gerard's Rajah of Kidnal was the first mascot given to the Irish Guards by the Irish Wolfhound Club. 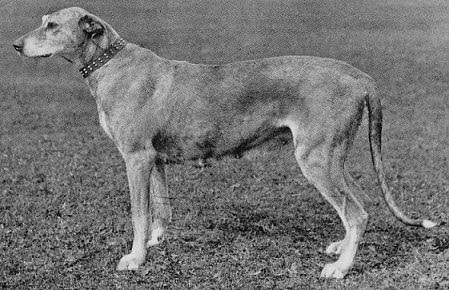 THE EVENING NEWS - Saturday August 17th, 1901
ANIMAL PAINTING IN HAMPSHIRE
At Headley Mill Farm, three miles from Liphook, Hants, is to be found the only school for animal painting in the world. It is conducted by Mr. Frank Calderon, and an interesting article has been written about it in the August "Strand". The school was founded six years ago off Bakerstreet, and it grew so in popularity that it was found necessary to move to the country, where genuine models could be used by the students. In fine weather the work is done in the open air, and a large barn is used when this is not possible. Models are got from the country folk, and these often cause much amusement while being sketched.
Mr. Calderon himself has a number of fine dogs, which figure to a large extent in the work of the school. Patrick, an Irish wolfhound, served as the model in "Orphans", Mr. Calderon's popular Academy picture. Patrick was a great favourite with the students, and there was much sorrowing amongst them when he died a year ago. A life-size cast of him in bronze occupies a conspicuous place in the class room.
Goats are occasionally used as models, and unless they are well fed every minute they make frantic efforts to lunch off paint rags and colour tubes; this has never been accomplished as yet, although one pretty girl student has had occasion to lament the painful disappearance of a picture hat, pins, roses and all.
At another time a bulldog of high degree, which had been kindly sent over from a neighbouring kennel for the students to paint, watched his chance when the attendant was napping and went tooth and nail for a canvas against a nearby tree, on which his trained eye caught sight of two demure-looking tabbies, apparently napping in the sunlight. He had torn out a goodly bit from both figures by the time the picture was rescued, and displayed the greatest ill-temper during the remainder of the sitting.
These little incidents all go to show the many ways in which the monotony of the work
may be relieved most unexpectedly.
​
Note: the following pictures and links have been added  and were not part of the original article: 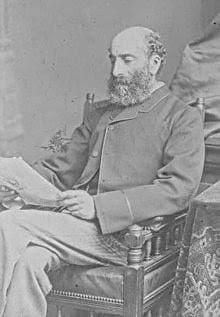 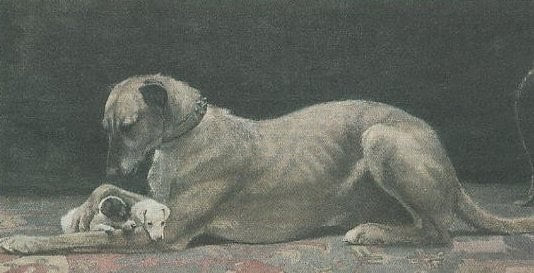 Mr. Cecil Aldin, the artist, died in London last night at the age of 64 years.
He had been ill in a nursing home since early in November.
Mr. Aldin enjoyed a world-wide reputation as a dog artist.
His pictures are prized in all countries by lovers of both art and animals.
A dog lover himself, he had a profound sympathy and understanding of canine ways.
This was reflected in his work - he was able to catch a dog's expression
and actions with brush or pencil in a life-like manner.
Owing to ill-health he had spent the larger part of the last two years abroad.
In 1932 he and his wife decided to live in Majorca. He took with him his five famous dog "models"
an Irish wolfhound, a long-haired dachshund, a sealyham, a bull terrier, and,
last but not least, a species of terrier described as "just a dog".
Mr. Aldin was also well-known for his water colour studies and pencil drawings
of other subjects of a sporting and topographical nature.
He had published pictures of famous inns, golf links, cathedrals, and hunting scenes.

"Time I Was Dead"
He was born at Slough in Buckinghamshire, and studied art at South Kensington under Frank Calderon.
In 1918 he was official purchaser to the National War Museum.
Recently he published his reminiscences under the title of "Time I Was Dead".
A publisher said last night: "His recent autobiography shows Aldin as he really was. It's title "Time I Was Dead" had a painfully ironic ring today, but it was his own and very characteristic choice.
"It arose out of a joke against himself when he heard a potential purchaser of an etching in a printshop asking the name of the artist, and, when he was told it was Cecil Aldin, he exclaimed
in tones of annoyance: 'It's time he was dead' "It amused Aldin immensely." 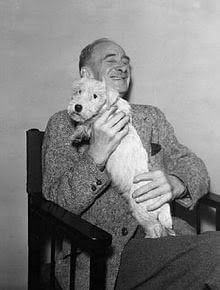 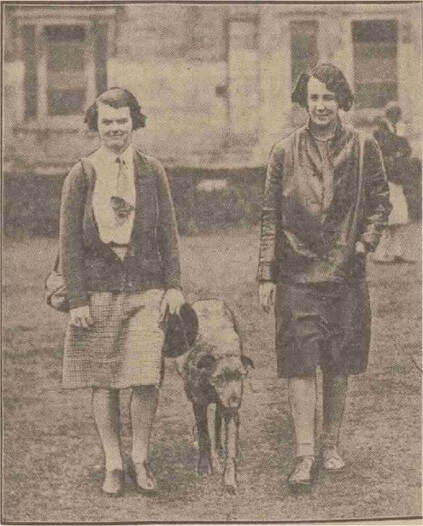 WELL GUARDED - Miss Garrick and Miss Clark, Formby, accompanied by Mrs.
Dunlop Hill's Irish wolfhound, walking on the Old Course at St. Andrews yesterday.
​
YORKSHIRE POST AND LEEDS INTELLIGENCER
Friday 12 September 1930
A Craven Canine Fancier
The Silsden Agricultural Society, whose annual show takes place tomorrow, has this year chosen a woman for its president - Mrs. William Knox, one of the best-known canine fanciers in the Craven district. She is the daughter of the late Sir John Clough, who was a leading figure in his time in Keighley's commerce. Mrs. Knox has had an interest in horses and dogs almost since she was a child. Some time ago she took up the breeding of Irish wolfhounds, and at present there are a dozen of these noble animals in her model kennels, which are fitted with vita-glass and electrically heated. She was once invited to visit Princess Mary's stud of Irish wolfhounds at Goldsborough Hall and, later, was entrusted with four of the Princess's dogs. For many years Mrs. Knox has been secretary of the Keighley branch of the
Royal Society for the Prevention of Cruelty to Animals.
Note: Mrs. Knox's kennels were Raikeshill and she had her first hounds in 1926. ​ 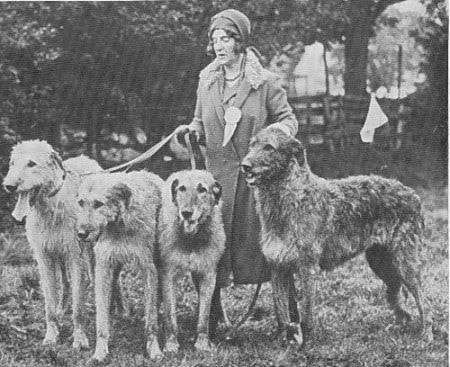 Mrs. Knox at her home in the West Riding of Yorkshire 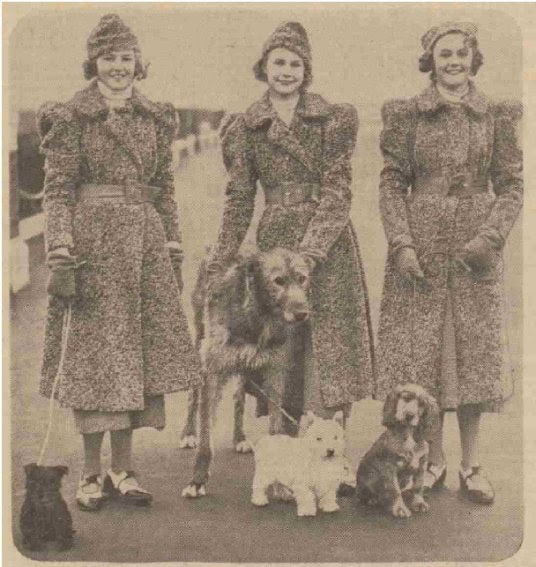 DRESSED ALIKE, and bearing a strong resemblance to each other, the Mawby sisters,
who are also triplets, are familiar figures at Shoreham. They have four dogs - an Irish
wolfhound, a Scottie pup, a Cairn puppy, and a spaniel puppy 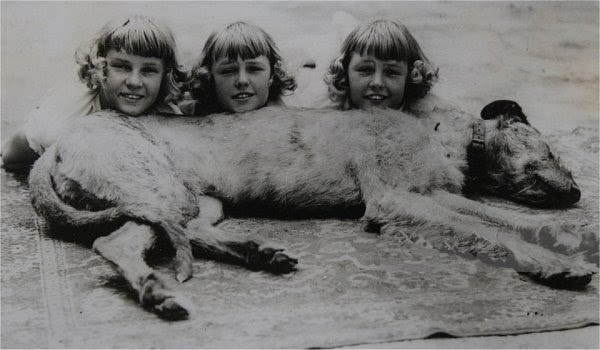 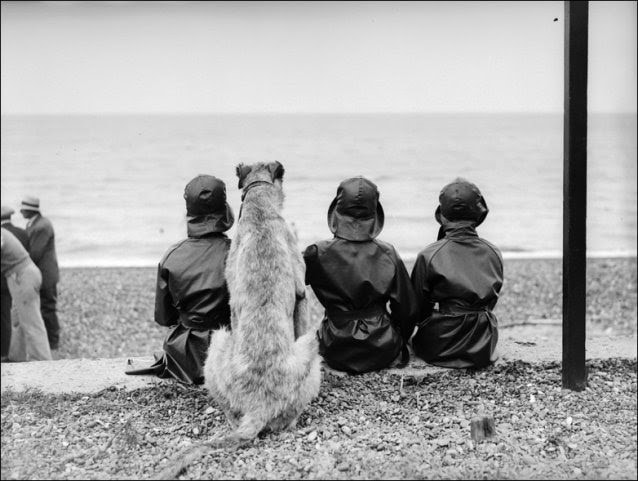 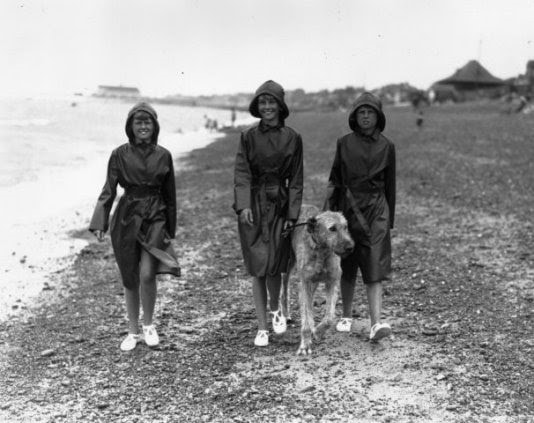 The triplets had frequently been in the media through their lives:- 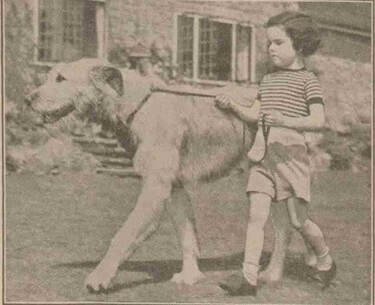